We have a saying in America that goes something like this: “That’s the best thing since sliced bread.”

The American sandwich bread that one could find pre-sliced was first sold in 1928 and literally was advertised as “the greatest foreward step in the baking industry since bread was wrapped.”

How good was pre-sliced sandwich bread for one’s health though?  If the slices were more uniform in size and thinner than this provided ease in which a person could eat more. Let’s not jump to conclusions that pre-sliced bread is to blame for greater intake of carbs and calories- this I do not believe,  but it is interesting to note that quickness and convenience may lead to eating more (just like labeling a pint of ice cream as “low cal and healthy” may lead to people eating the whole pint and not one half cup (~ 80 grams).

In January of 1943 during war time there was a short ban on sliced bread from US Officials as a measure of conservation- concurrently in Germany my Grandma was also given food rations. She once told me a story that when her mother sent her to get a loaf of bread, and she was so hungry that she ate almost the entire loaf by the time she returned home. This wasn’t a convenience factor, this was a starving child.

During the time of the ban on pre-sliced packaged loaves of bread families found themselves having to go without the grab-and-go convenience.  In 1943 The New York Times posted a letter from a house wife reading:

”My husband and four children are all in a rush during and after breakfast. Without read-sliced bread I must do the slicing for toast- two pieces for each one- that’s ten. For their lunches I must cut by hand at least twenty slices, for two sandwiches a piece. Afterward I make my own toast. Twenty -two sixes of bread to be cut in a hurry!”

I cannot help but wonder if “being in a hurry” was built into the American culture’s DNA, or if this was a rare case of just one pissed off housewife who had bigger aspirations than slicing toast.

The ban was lifted in March of 1943 and housewives could once again be sane.  The rest of the world also has a history with sliced bread, which you can read more about here.

Moving on to modern day Dubai, there are still people who are trying to revive the time when bread was made fresh on the daily and slicing was an option once you bought it. The Master Baker at 1762 Stripped is one of those people.

When I drove up to 1762 at One JLT the outside seating section reminded me of a garden cafe in Paris. Once I entered the space it was like walking into a Manhattan cafe at lunch hour on a work day. A rainbow’s worth of colors beamed from the clear displayed case in the form of Asian veggie rolls and salads; the sound of milk steaming sang  from the espresso machine delivering up frothy cappuccinos; people settled in for a meal or set up shop for a “home office,” and there was a golden brown glow of fresh made bread sending good vibes and good aromas to all.

Pain au Levain has a slight tang to it because of  the acidity produced from the sourdough starter and fermentation. This acidity helps to hold in moister, and therefore it will keep a little longer outside of he freezer than other breads made with yeast. Like most french food and drink items the production of Pain au Levain is regulated in France by the “bread decree” making sure the pH of the bread is not greater than 4.3 and an acidity of 900 parts per million. I can’t be the judge of that, but I am confident in my “judgement” that it tastes great, is FRESH and has health benefits!

Knowing all of this baking science information it now makes sense that there were only 3 loaves there when I arrived at 1762 and not more to be made for that day. Something tells me that would NOT go over well with that US house wife from 1942, but it goes over really well with me as a person and as a dietitian (yes, dietitians tend to have a decree of our own). Here’s why:

The Master Baker Andrew and the rest of the team do not promise any 100% gluten free options, however for gluten intolerance this pain au levain just may be the one for you. They also have a higher protein “paleo loaf” for the fitness buffs out there, or for anyone like me who just really likes fresh bread.

All I can say for now is that 1762 Stripped is the best thing to happen to to JLT in Dubai since before sliced bread. 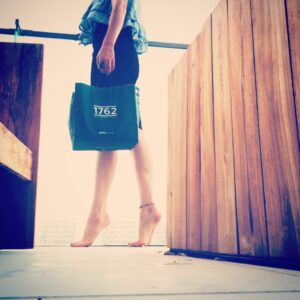 2) Why is it That I Can Digest Sourdough Bread and Not Commercial Bread?; 21 December, 2017: Vanessa Kimbell. The Sourdough School; https://www.sourdough.co.uk/why-is-it-that-i-can-digest-sourdough-bread-and-not-commercial-bread/