Skip to Content
Home IN2 Updates Greece To Takimi: Paros, Greece
by

The sun kept chasing her eyelids as she shuffled from bench to chair. Her struggle to find a spot where she would not be blinded by the big yellow ball burning in the baby blue sky was undoubtedly an annoyance to her, and a scene of innocent attraction for him. It was the unstoppable sun’s rays that distracted her from noticing a boy gazing at her from the far corner of the cafe’s entrance. He had been observing her every move since she arrived at the cafe. She was their first customer and he was a local boy who was trying to escape an island that was known, or rather unknown, to others as a hidden gem, the little sister to Mykonos, a dream to some and a reality to the dreamers.

He was on holiday with friends taking a break away from the party scene to relax and answer to some work calls on the island of Paros. He was longing for a place a bit more foreign. New York City was her home and adventure is what she longed to have. She could be his New York City. He could be her adventure. This girl, who seemed so involved in her omelette, he knew was going to be hard to win over. He witnessed as she took 2 pieces of bread and wrapped them in a napkin placing them discreetly in her small blue backpack. She was a survivor, he thought. 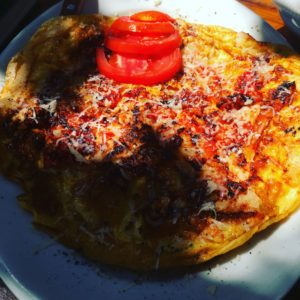 The owner of the Cafe passed by her holding stacked plates in the crevice of his left elbow and two empty pint bottles in his right hand. He asked her something that the boy could not hear over the strong breeze on the island that day. She smiled the most beautiful smile he had ever seen a woman’s lips maneuver to reveal. She had dimples; the one on the left cheek was more pronounced than the one on the right. An imperfect symmetry, he thought. She laughed and held up her freddo espresso. He guessed that the owner had asked her how her coffee was and she replied showing her satisfaction. He imagined her to be a sweet girl; kind, yet fierce, and he had to find out for himself.

He took a deep breath and walked in her direction tripping slightly realizing that his shoe laces had come undone on his left shoe. He wondered how it would be to untie the back of the bathing suit she was wearing. Leaving the shoe untied, he continued on his way.

“Are you a swimmer?” He asked. He did not know where the words came from or even how his vocal cords were able to vibrate to make a distinct  pattern of noise for her to understand.

She seemed startled at first, but then she smiled. That same smile he fell in love with only minutes before. He could tell that as much as she was kind and open she was guarded and shielding.

“Ummm I swim. I mean I like to swim, but I am not a professional if that is what you mean,” she answered back. His heart sank in his shoes spilling out onto the ground beneath him. He knew he should of tied that shoe.“Why, what makes you think this?” she asked.

His inner dialogue ran wild – get a hold of yourself. Think. Say something. Your mind is going blank. Don’t mess this up…

“I noticed you were wearing your bathing suit,” he said, and once he said it he realized that this could go in a direction he had not hoped for.

Lucky for him, she was a good judge of character and did not see harm in is weird statement or odd behavior. She seemed rather amused.

“Well this is island life right?” She asked,  easing any tension that was clouding his brain. “I used to live in my bathing suit when I was a kid. So I suppose it’s sort of nostalgic for me. “ As she said this her lips pursed causing the corners of her mouth to curve upwards; her dimples contrasted against her porcelain complexion.

He smiled too, and he noticed something different about her. It was her eyes. They became lighter in color. Like the color of the sky- baby blue. The muscles of her neck relaxed and simultaneously the veins leading to her heart deepened  in color. It was at that moment he knew that there was no turning back.

“Where are you visiting from? I mean I have to assume you are not a local, even though I could also assume you are a mighty Aphrodite,” he cringed at the pick up line that just came out of his mouth.

“Would you like to go on an adventure?” He asked.

“I would love to,” she answered.

And so they did.